I've recently acquired a new gizmo to my typewriter Den. It's called typecleaner and it cleans the typeface/hammers from "ink".

This is some kind of modeline clay at least at the look and feel. The difference lay in the material: this one is sticky and firmly stays in shape. 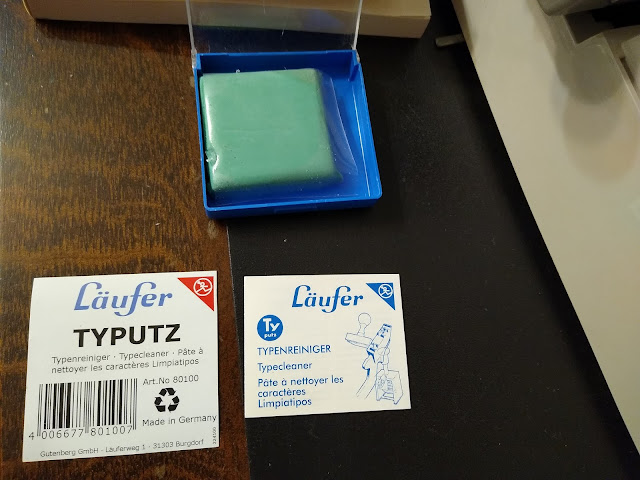 Working with it is very simple, you simply press it firmly to the hammers/typeface many times over :) It might sound bad, but actually is quite fast. The clay stics to at least few hammers at the same time and "consumes" the ink wastes. Afer dozen seconds it looks like that: 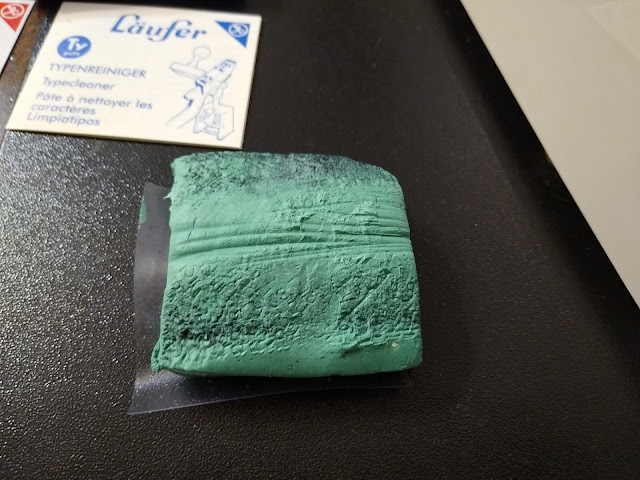 And here are the effects on a nearly mint typewriter that I used the very day (typeface was clean before the use):

As You can see the effect is quite positive :) It's clean work, without use of any chem or brush, only our hands and magic clay ;)

After the first test I used it on my Olympia SM3, that is used more frequently and wasn't cleaned for some time. The typeface was not only more dirty but also the ink had time to dry on the hammers.
So this is how it worked:


As you can see the effects wasn't so spectacular as with the clean typewriter, but the clay took a load of ink anyway. The small spaces in the narrows of typeface wasn't cleaned properly, but It's hard to blame the gizmo. It would be a good start for more detailed cleaning with brush ang chems :)

I think that for collectors, that use many machines ocassionaly it's a great idea. You can keep them clean without much effort. Also for somebody, who simply needs to have things tidy! 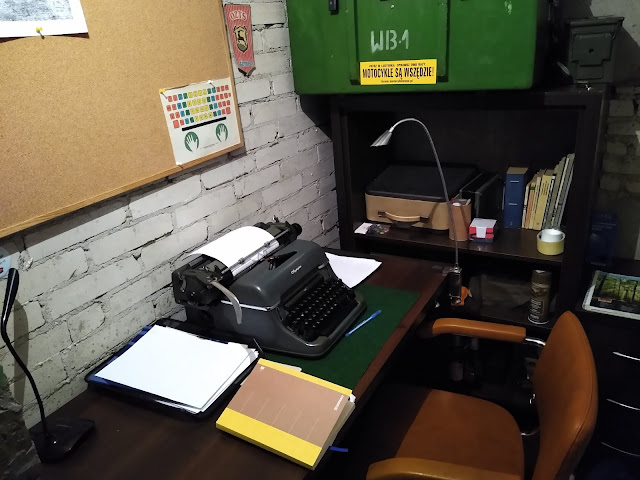 In one of my favourite games of all time: classic Fallout 1 was location named The Den.
From few weeks I have my own space, just for typewriters and writing - and because it's placed half-underground in the basement level of my block... I named it like that ;)

I also acquired Olympia SG-1... It's in worked-up state, but functional and probably the smoothest typewriter that I typed on. I have to admit, that there is something better than Olympia SM3 or Hermes 3000... If it only wasn't so big! At other hand - finally a typer that doesn't move while typing!

Right now I'm working on big project, so my maine forces are focused on writing. Hopefully I'll be able to put something here from time to time - I really like this blog. Maybe a writer workshop tips for anyone interested? ;)

First tip: get big typewriter - they do the job.

P.s.: In my story published in Cold Hard Type project Vol.1 "Paradigm Shifts" the main scene was placed in the very basements that now I'm working in ;)

This is video of testing my latest offer on Etsy store: a beautiful Hermes Media 3 :)

I'll try to do the same show for every typewriter for sale from now.
I belive buying a dozens-old piece of machinery from the other side of the globe should be as trustworthy as possible :) At least in my little store ;)

My Etsy store will probably be reopened from June.
Restrictions on international shipments are being phased out :)

For safety reasons, the machines will be sanitized with an ozonator before shipment.
They are also always cleaned with a preparation with a high alcohol content.

I wasn't very active in April because I was secretly working on a new service for my store. For some time I was looking for a producer who would undertake regeneration of platen in Poland. Sending it abroad, especially overseas, would mean weeks of waiting and double the costs. 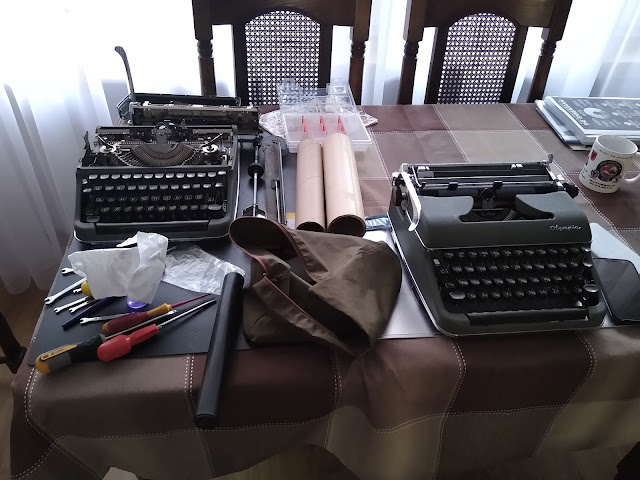 From a dozen or so queries sent, only two bidders responded altogether.

And with one I decided to try.

Olympia SM3 was chosen as the prototype, and more specifically the one I bought for parts. So I had no fear that the item would be damaged or lost. 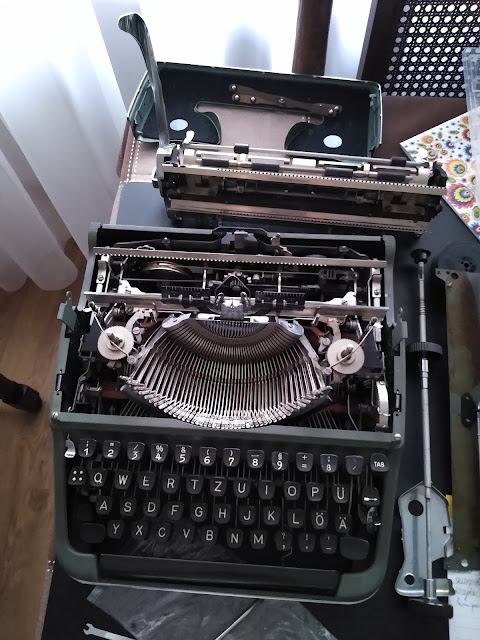 After dismantling the element and getting rid of the rubber layer (which turned out to be quite simple), I sent the whole thing to the company 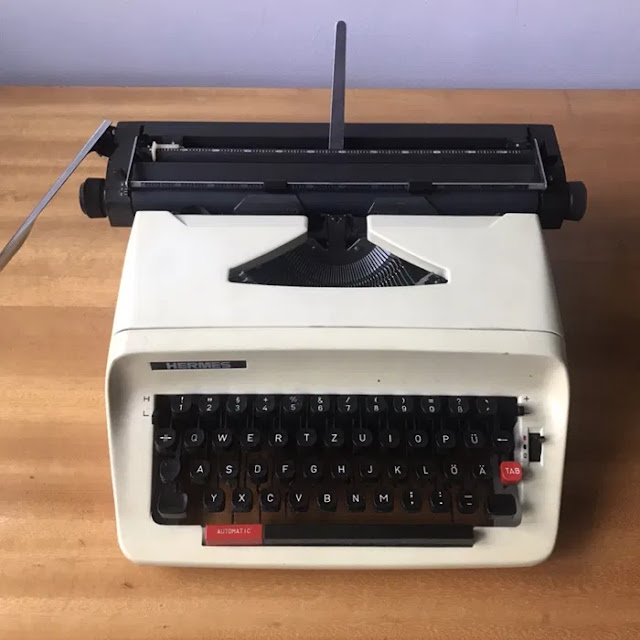 I'm not sure when and why Japan manufacturers begin to brand their typewriters with european names. Apart from Hermes I've also came across Olympia, Brillant Neckermann (one at my shop for example), and at least few others. 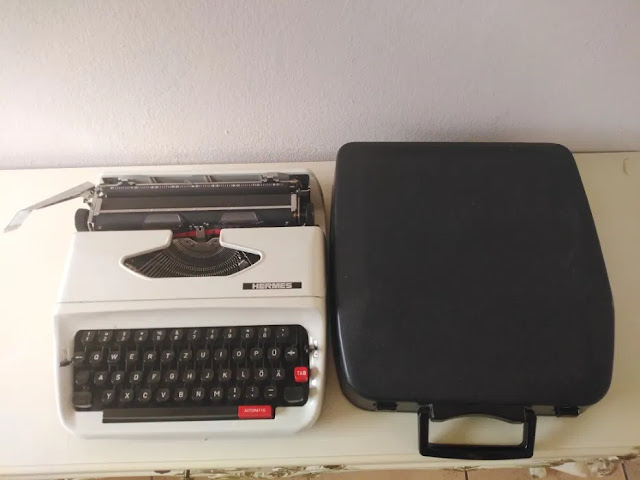 It had to be around 80's, since all of the factories made their own typewriters since 70's with more or less success.
I'm not sure if this was even legal, but after the personal computers hit the market I can imagine that most manufacturers could sold the name at least in the terms of typewriters.
And japanese could sold their products not only back to europe (I found few machines in v.good condition... as unused), but mostly to poorer parts of the world. 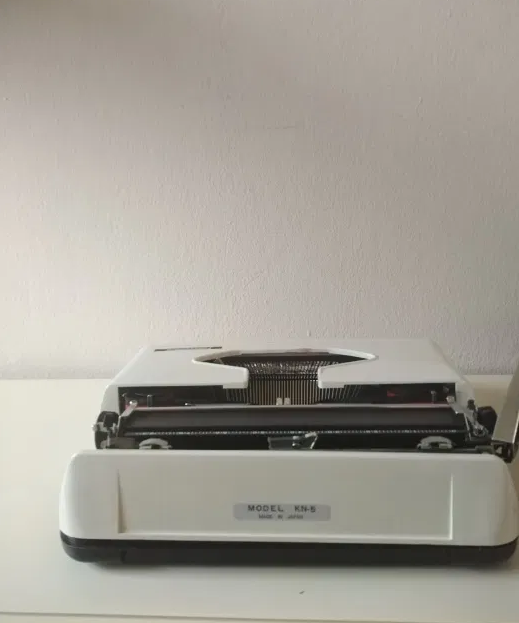 They are far better than many clones or licensed products made in europe for example, whitch were also part of selling off what they could (classic manufacturers), before it will be worth nothing...
Mechanics is working v.good, the aligment is straight, and typing isn't a problem... I can't say that about UNIS or TBM products that I came across (Olympia, Olivetii licensed models, made in Jugoslavia). 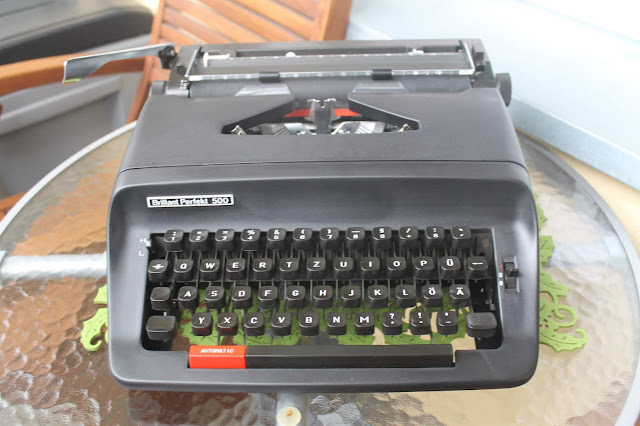 If you want something fresh and reliable I think these japanese models are still better option that new "made in china" typewriters.

Please visit my store at Etsy, where I'm selling typewriters and some other vintage specials :)